My thesis is due in two weeks, so let’s keep this short. April has been a kicking month for the New Aesthetic – a term so nascent I feel like it’s redefined after each new blog post on it. And there has been a whole lot written this past month thanks to a SXSW panel that brought it to the attention of those beyond the tech art cognoscenti. As a student of ITP, I find it interesting that my work is almost immediately categorized as New Aesthetic. But also that a number of works by classmates and alums of my program are being used to define the movement. 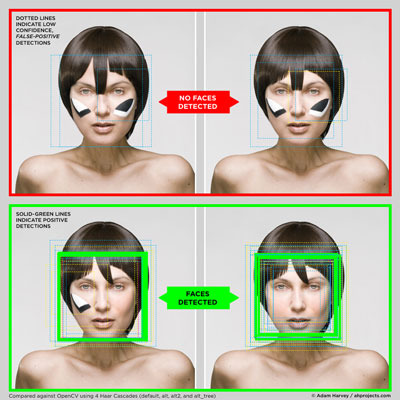 My take on what the New Aesthetic is: we are beginning to live in a world where our machines are learning to see, to hear, and to think, but not quite in the way that we humans see, hear or think. Our growing reliance on these technologies have forced us to empathize with these computational devices. Pixelization, the loading icon, and the blue screen of death–visual anomalies created by computers that don’t happen in our reality –are recognizable and understood because we have become comfortable with how computers process the world. While fifty years ago the public saw the Earth from space via satellite for the first time, this view of our planet from above has become the norm thanks to mapping technologies like GPS and Google maps.

Some artists, architects and writers have taken advantage of our newfound confusion to either further blur the line between the digital and real or to call attention to it. There is a whole tumblr devoted to New Aesthetic sightings. But one thing that strikes me is how mostly unaware people are when they create something which could be considered New Aesthetic. People are creating things with the tools at their disposal, and it just so happens that those tools, either by limits or by convenience, develop things of a certain aesthetic. Russell Davies points it out best: impressionism was partly due to the invention of paint in tubes. So what is being created now that we live in the age of the convenience of control-c and the limits of graphic cards?

There has been plenty written about this in the last month, especially by Bruce Sterling. If you’re interested in this topic, I urge you to read James Bridle’s blog post as a primer. There has been some harsh criticism of the idea that this art movement even exists, and some interesting responses from some of my ITP colleagues. But, like I mentioned before, my thesis is due in 2 weeks. I skimmed the majority of these articles with a monkey on my back. One which I have to attend to. Right now!