Ian Svenonius: A God Among Undergrads

Ian Svenonius with Chain and the Gang, photographed by Adela Loconte.

Every college student worth their salt has some figure of the subculture that just blows their goddamn minds when they’re of that perfect, impressionable, apple bong age.  Most of them forget these figures ever existed years later as they tend to their busy adulthood.  The weird thing is, that mind-blowing experience is most likely still working its magic on them and they don’t even know it.  I can only wonder at how many former art students of the nineties are operating under the subliminal influence of the 1998 Make Up show where Ian Svenonius preached his liberation theology right in their face. We will simply never know.

Ian Svenonius is a national treasure.  He’s got a book coming out in the winter called Supernatural Strategies for Starting a Rock ‘n’ Roll Band.  You should probably pre-order it and see him speak if he does a reading.  Or go see his band Chain and the Gang if they play in your city, or buy their record In Cool Blood when it comes out in June.  Better yet, right now, watch this video of his former band Weird War doing an airtight performance for a bunch of kids in a gymnasium:

If there is any justice, Svenonius should be invited to participate in the Whitney Biennial on and off for the next two decades, and he should refuse every year.  But there isn’t and he won’t.  Still, the hypothetical ascendant visiting artist faculty members of the hypothetical art colleges in my hypothetical Svenonius Biennial Universe would be privileged to share air with the man, as generations of musicians and artists have been cribbing, quoting, and outright stealing his ideas for years.  Which I suppose is only fair, since, as the host of the excellent Internet talk show Soft Focus, and a creator of numerous high-concept cultural-quotation-laden rock bands, he is an expert at recombining the raw materials of others’ artistic offerings to his own ends.

In his 2006 book The Psychic Soviet, Svenonius writes extensively about the relationship between rock and religion.  Rock after punk is characterized as a group of quarreling sects, similar to the splintered Christian sects that developed after the Reformation.  This line of thought overlaps with one laid down by Dan Graham in his 1982 video Rock My Religion. 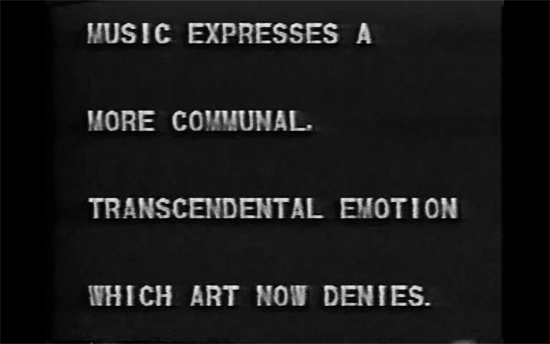 Still from the film "Rock My Religion" by Dan Graham

“Warhol and other Pop artists had brought the art religion of art for art’s sake to an end.  If art was only business, then rock expressed that transcendental, religious yearning for communal, nonmarket esthetic feeling that official art denied.  For a time during the seventies, rock culture became the religion of the avant-garde art world.”

In the D.C.-area art school circuit of the 1990’s, this religion of the art world certainly experienced a revival, and its most stalwart and imposing preacher was Ian Svenonius. At that time Svenonius fronted The Make-Up; a band that mixed confrontationally vain hairstyles and matching Motown-throwback outfits.  The Make Up played a genre of music they termed “Gospel Yeh-Yeh,” defined as a combination of French racing music and black southern gospel.  In fact, the music generally resembled garage punk mixed with soul.  I was going to art school in Baltimore during their heyday and got to see a couple of shows.  For whatever reason the show they played at a student hall at Johns Hopkins University stands out as one of the best things I have ever seen.  Their live shows were almost unbelievably powerful.  These were the kinds of performances charged with such primal sexual and spiritual energy, you could relate to all those hysterical teenage girls at the T.A.M.I. Show. 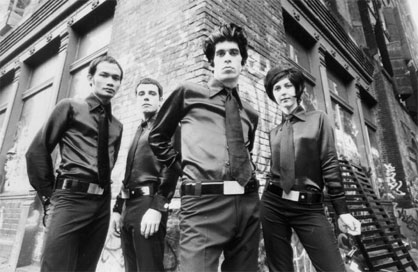 When fronting the Make-Up, Svenonius had a Simian carnality that was alternately hysterical and cooing.  He could turn on these sides of his performative self like hot and cold running water.  Prior to this mod master of ceremonies persona, Svenonius fronted the manic and violent Nation of Ulysses.

Returning to Rock My Religion, according to Dan Graham “In the 1950’s a new class emerged, a generation whose task was not to produce but to consume; this was the ‘teenager.’  Freed from the work ethic so as not to add to postwar unemployment and liberated from the Puritan work ethic, their philosophy was fun.”

Forty years later, the Nation of Ulysses retained this boomer-era notion of American teenager as an insurgent social class, carried it to an absurd extreme, and leveled it against the boomer generation itself.  To this end, NOU’s first album 13-Point Program to Destroy America is a masterpiece.  The packaging evokes Russian Constructivist posters and the band, pictured on the cover from a heroic point of view, look like a group of serious-minded greasers.  The music is a blend of hardcore, noise and untrained improvisational jazz (well, there were cacophonous trombones that evoked an undisciplined high school marching band–the jazz influence is more prominent in their next album, Plays Pretty for Baby).  Similar to Public Enemy and other hip hop groups of the day, 13-Point Plan teems with cultural quotations, though no samples are used.  There are references to Frank Sinatra, the Black Panthers, the ’70’s cult teensploitation movie Over the Edge, Parliament Funkadelic, Darlene Love, and J. Edgar Hoover.

The album cover of 13-Point Program includes a manifesto evocative of Situationist tracts and the liner notes to MC5’s Kick Out the Jams.  Instructions are provided for strategically mutilating your fingertips in order to avoid detection by the authorities.  It advises against brushing your teeth for ideological reasons.  Inflammatory rhetoric is applied to both geopolitical issues and the banal points of childhood protest.  It is simultaneously a mockery of straight edge hardcore’s earnest and defiant posturing, and an act of one-upmanship. The album is a work of sophisticated and complex aesthetic and ideological self-reflexivity.  The fact that it was produced by Ian MacKaye, reluctant father of the straightedge movement and founder of Minor Threat and Fugazi, and released on his iconic Dischord label, is the icing on the cake.

As a veteran rocker who has maintained a presence in the underground without “selling out” to corporate record labels, Svenonius represents a lifelong commitment to artistic principals, pursued with integrity and indifference (perhaps hostility) to financial gain.  At the same time, his actual philosophical position is impossible to pin down, vacillating between earnest Marxist ethics, self-reflexive and archly ironic put-ons, and narcissistic vanity.  Ultimate indie cred, inscrutable intentions–the gold standard for which all nineties art students strove.

Chain and the Gang.

I recently caught Chain and the Gang at Satellite in Silverlake.  I am a lot older now and I rarely go to shows.  Svenonius is way more staid than the kid throwing himself around the stage in those old Nation of Ulysses videos, but the band was tight, consisted of members much younger than Ian, and regardless of anyone’s age they stuck to that singular tenet of the teenager’s philosophy: they had fun.