East to West: Notes from the Road and the Slippage between Art and Life -Claes Oldenburg, from “I am For an Art”

I have just traveled from Michigan to New York to San Diego, a task worthy of some sort of honorable mention, or a cold beer on the finish line at least; both of which I have received informally. After the end of year flurry at Cranbrook Academy of Art, my husband and a friend of ours packed our studios and cars, and headed east at 3:00 am. Call us crazy, but we wanted to make it to a friends’ first solo show in the Lower East Side the next night at 6:00 pm. With our map unfolded in front of us (via Google), and the darkness of the Detroit sky around us, we headed East. I have transcribed here notes from the road, where art and life somehow spilled together; sites, sounds, galleries, and landscape equally enticing our active minds. From the concrete jungle of New York, to the open skies of the desert, both art galleries and roadside attractions seemed to fufill the same visual longing for us travelers.

We arrived to the Marc Straus Gallery in New York after a full day of driving, where we were greeted by cold PBRs and a slew of Cranbrook alums; some of which I had literally seen days earlier at school. The artist, Martha Myskos, filled the upstairs gallery with an impressive grouping of disparate sculptural moments that all seemed to work together as a unified installation. Seeing a fellow Cranbrookian taking on a show of this scope was an encouraging and enriching experience. The rest of our time in New York was spent seeing old friends, going to Chelsea, the Whitney Biennial, MoMA, sunbathing by the Chelsea Piers, and trying to navigate the late-night subway system. Since we live in Michigan, my husband and I often do these marathon art trips; it’s amazing what you can see in just a few days, but the impending “art-burn” is inevitable. After the four day art-viewing stint in New York, we piled back into my friend Hess’s red Mercedes (complete with sheepskin seat covers and no working AC), and pointed the car west. The route was a hopeful travel through the south: Virginia, Tennessee, Arkansas, Oklahoma, Texas, New Mexico, Arizona, and finally California; home sweet home in San Diego.

The first day passed quickly, as it does on long road trips; filled to the brim with camaraderie, excitement, and the Mamas and the Papas’ “California Dreamin” on the stereo. After this trip (the second of my journeys across the nation by road) I realized that road trips offer a strange type of enjoyment–a hot, sweaty, uncomfortable, stiff, munching-on-beef-jerky-and-stale-popcorn kind of enjoyment. I suppose it’s not the activity itself that entices people to drive, but rather the sites on the road, feeling the warm breeze through your hair, and knowing the freedom of flight. It is a visceral action.

After driving through and camping in the lush trees of Virginia, we headed to Nashville, where we spent a day off the road riding the tides of rivers, and playing with dogs. Enchanted by the color and texture of the river rocks, we delighted in skipping them into the choppy waters. After leaving New York City, I was struck with the openness of the road. New York is many things, but spacious and slow are not among them. The river in which we swam was both of these things, and so was Tennessee: where you can drink a beer as a car passenger, and buy great jerky on the side of the road. The next day we bid adieu to the sleepy warm air of Nashville and continued west. Our Carload at Cadillac Ranch, TX.

Soon we came across our first true roadside attraction: Cadillac Ranch in Amarillo, Texas. Here, ten paint-covered Cadillacs proudly protruded from a dirt field in a systematic row. As we approached these monoliths, a man offered us his spray paint to make our mark on the vehicles. We began to add white zig zags and purple stripes, and in this action (just like skipping the stones the day before) we found familiarity in creating movement with our hands. Despite the meaningless intention of spraying paint onto a car, the action felt as clear and rewarding as working in our studios. 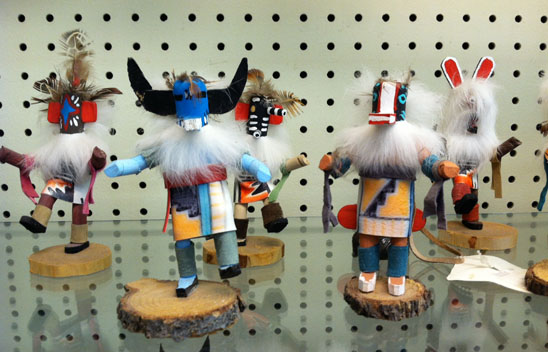 After a few more states, New Mexico welcomed us. Once there the scenery changed from lush vegetation to familiar red sandy plains. I felt we had finally arrived west; after days of flat (yet lush) landscape, mountains welcomed us. Trading posts abounded, and turquoise jewlery was purchased: each stop was truly a feast for the eyes. Beautiful hand-dyed tapestries and crafts lured us in with their rich patterns and colors. We came across an ostrich farm complete with defunct motorized dinosaur sculptures with scantily clad mannequins strapped to them, abandoned school busses adorned with non-functional lights and bungees, and a huge painted sign that read “not responsible for accidents” in blue block type. The oddity with which these haphazard structures were created were reminiscent of Martha’s show in a strange way: she strapped objects to outmoded TV sets just as these mannequins were strapped to dinos and buses. As we continued to drive,  huge cacti began to sprout up, soon filling canyons and dotting the sides of mountains. Strange, Dr. Seussian trees lined the historic Highway 80; the landscape continuing to change hour by hour.

I was struck by the visual rubric with which we were looking and enjoying the sites along the road: color, pattern, shape, scale, line. These are all the same devices with which we enjoyed works such as Anish Kapoor’s massive weathering steel structure at Gladstone Gallery, or Ernesto Neto’s interactive netted structures at Tanya Bonakdar Gallery just days before in New York. I’ve talked to my friend Hess before about how the two of us can spend hours delighting in the minutiae of the side of a building or a neon sign, pointing out to each other really nice areas of juxtaposition of line and form, often accompanied by “oooh’s and aah’s.”

I guess as artists, we see the world, not just in art critiques but also on the road and at creepy rest stops, through this lens with which we’ve been provided since our Art 101 classes. The ways in which we have been taught to see art spill over into our day to day, or as Claes says, “art that takes its form from the lines of life itself.” I mean, not to get too Duchampian here, but isn’t an eight-foot tall cactus in the middle of Arizona a feat equal to one of Sarah Sze’s installations? Both are spectacles of form and composition. Now back in San Diego, the familiar landscape seems so pressing. Stucco, cacti and terracotta roofs provide the stimulation that I’m missing in the summer months away from grad school. You just have to keep your eyes peeled and the wind in your hair.