Beatriz da Costa with Juan Recaman (camera), “Dying for the Other” (video still), 2011.

In 2011, Beatriz da Costa underwent brain surgery to remove a cancerous tumor. Her video triptych Dying for the Other gives us glimpses into her life in the three months following the procedure. The artist is shown at different times moving about with the support of a walker, exercising her motor skills, stretching her limbs, sorting her daily medications, and chopping kale. The moment when da Costa is asked to spell words like truck and picture is telling: she’s unsuccessful and seems completely unaware. Footage from a New York City lab for breast cancer research is juxtaposed with these difficult moments in da Costa’s life. Bald female mice aged four to six-weeks old are being weighed, prodded, injected and dissected. Rarely do I feel sorry for the city’s vermin but this is awful to watch. It’s hard to distinguish the live mice from the dead ones. You have to wonder if there’s not a better way. Then again, does it matter if it saves human lives? In the years since her surgery, da Costa has explored this question about the price of sustaining life. Her projects in the series The Cost of Life have taken a variety of forms, from this video triptych to a demonstration garden and most recently a cooking class.

Dying for the Other is on view at the Sheila C. Johnson Design Center at Parsons, where it is included in the exhibition Art, Environment, Action! The theme of the environment has become a fall tradition at the Center. They’ve paid particularly close attention to the role of art and design in food systems, urban agriculture, and climate change. With this show, curator Radhika Subramaniam wanted to present an exhibition that went beyond art that’s explicitly about nature. She says of da Costa’s video, “It’s not just about illness of the planet but asks what is the relationship of our body to the world outside?” Oftentimes when people talk about the environment it sounds abstract, like something we exist at the side of, instead the force on which our lives depend—and to which art almost always, in some way, responds. Da Costa’s work brings the conversation, says  Subramaniam, “back to the body.”

For some people, Hurricane Sandy’s Northeast destruction sounded a wakeup call: climate change is real. Also it’s lethal. I don’t know if scientists have tracked the rise of global warming alongside rates of cancer but it seems logical that the two would correspond; our health is tied to the land. When Sandy started wreaking havoc, da Costa and Subramaniam were already sounding the alarm: When the environment is unhealthy or unstable so are we.

Art, Environment, Action! is not an exhibition so much as it is a “teaching lab” where artists and visitors explore and share ideas in interactive workshops. For these, Subramaniam (working with Manuel Miranda and Jiwon Lee) has brilliantly designed the space: painted wooden boxes form a giant “toy box” at the center of the gallery. Stored underneath the boxes are workshop materials and chairs and even a mini refrigerator. It was on this platform that I sat in anticipation of da Costa’s “anti-cancer-cooking class,” Flavonoid Time!

Flavonoid Time! relates to another project in The Cost of Life series called The Life Garden. This beautiful living installation of plants, herbs and mushrooms with reported anti-cancer properties was installed at Eyebeam last fall. What the artist advocates here is an “alternative” approach to healing. Although modern medicine has saved the lives of many cancer patients, scientists and health practitioners repeatedly warn us about the foods we eat. Cancer can be fought and sometimes prevented with a good diet. Da Costa started studying anti-cancer cuisines last year and is already quite knowledgeable on the subject. At Flavonoid Time! she gave a broad overview of good-for-you foods and theories on anti-cancer eating. Among the interesting tidbits she shared is that turmeric reigns supreme though its bioavailability is low. 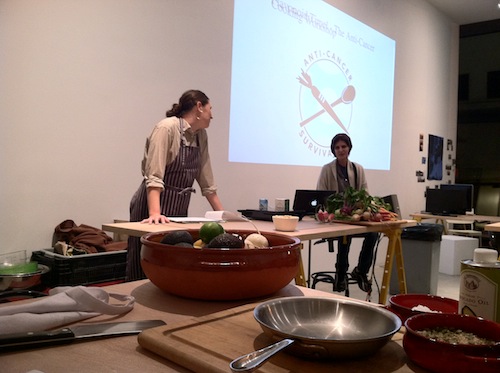 Flavonoid Time! participants were instructed to each bring a cutting board, sharp knife, place setting (cutlery, plate, bowl, glass), and an apron. People around the table ranged in age, ethnicity, and professional background. I was pleased not to see the usual art world suspects; it would have been a shame if this had not reached a larger audience. Chef Michelle Fuerst, who has cooked at California’s famous Zuni Café and Chez Panisse, and is also former curator of Slow Food Nation, led the cooking portion of the workshop. (Da Costa and Fuerst met in the Montalvo residency program on the West Coast.) Working in teams we prepared a spread that, to use an old school phrase, rocked my world: spicy red lentil soup with tomato, leek, and herbs; muhammara (red pepper and walnut dip); arugula salad with carrots, crunchy seeds, avocado and a dollop of quark; rice pudding with honey and cinnamon; mint and lemon verbena, and anise teas. Never did I imagine that an anti-cancer meal would be so delicious. Participants were given a small but generous take-home recipe booklet. Printed on its cover are the words “Anti-Cancer Survival Kit,” the title of another, newer project in The Cost of Life series. The kit, made for cancer patients and the people who love them, is being designed by a group of individuals who “have a personal connection to the topic.” If you’ve ever seen someone you care about suffer cancer, you know that the desire to nurture that person back to health, to ease their pains even for a moment, is tremendous. Yet the options for cancer patients can seem limited and, from all of the information available online, also frustratingly vast. With The Anti Cancer Survival Kit da Costa aims to provide some useful tools and know-how. “It’s the kind of kit I wish somebody would have given me as a gift, when I was first diagnosed three years ago,” Da Costa has said. She was diagnosed with her first cancer at the age of 14. Today, at 38 years of age, she continues to battle the disease. Looking at da Costa across the room as I chopped vegetables and filled tea bags, I was in total admiration of her perseverance. How could you not be? That she continues to devote herself to making art and then, during an obviously delicate moment in her life, bring people together to learn and enjoy a meal, is nothing short of extraordinary.