Looking at Los Angeles | Slavs and Tatars: “Help the Militia, Beat Yourself Up–Only Solidarity and Patience Will Secure Our Victory” On the evening January 31, I attended the opening of Los Angeles’s first Art Book Fair, organized by Printed Matter, at MOCA’s Geffen Contemporary. I stuck my thumbs into countless books, fingered booklets, zines, and totes, and eyed appealing bits of unframed paper, including printed dayglo declarations by L.A. based artist Eve Fowler. I paid tarot reader/artist Marty Windahl for advice on busting through feelings of stagnation. And from the booklet Certainty of Hopelessness by Christopher Glazer and Sean Monahan, I received free guidance on how to discharge my insurmountable student loan debt. (You can download the pdf here.) At large art events, I am accustomed to the awkward awareness that I am part of a crowd that is building cultural capital for an often unseen entity, feeling quite separate from material exchange and the conversation surrounding it. But at the end of this event, I was feeling kind of delirious from all the exchange of artist made goods, conversation, and information. When I reached the middle of the fair, I was drawn to a table for the Italian publication Mousse due to the presence of the extraordinary librarian and curator Olivian Cha, founder of the Works Sited curatorial project at the Los Angeles Public Library (LAPL). This ongoing series of rigorous arts programming and exhibitions engages the library’s collections, practices, and display systems. Olivian introduced me to the collective Slavs and Tatars–the most recent Works Sited participants–through their book Molla Nasreddin: the magazine that would’ve, could’ve, should’ve that features reproductions and interpretations of Molla Nasreddin, an early 20th century Azeri politically satirical magazine. Printed in Azerbaijan, a small country in the Caucasus, the magazine headquarters were uniquely situated in the geopolitical crossroads between the communist revolution-era Russia and Muslim world, which would see the rise of revolutionary Islam later in the century. The publication addresses the integration of modernism into Islam, women’s rights, education, and critiques of colonialism through humor and code. Methods of self-censorship and plays on language allowed it to broadly circulate from Morocco to India.

Founded as a book club in 2006, Slavs and Tatars is an international collective of (mostly anonymous) writers, artists, and designers whose research-based and interdisciplinary work focuses on the area “east of the Berlin Wall and west of the Great Wall of China.” Their programming for Works Sited includes an exhibition, encased in library cases, titled Dear 1979, Meet 1989. This includes articles, texts, and printed ephemera from the collective’s own archives pertaining to intersections between the Iranian Revolution and the Polish Solidarność movement. Within the library cases, they have placed historical texts from both movements alongside satirical ephemera of their own making, such as a postcard print of The Monobrow Manifesto. In addition to incorporating fragments of their own library into the LAPL, a member of Slavs and Tatars gave a lecture-performance on behalf of the collective. Titled Molla Nasreddin: Embrace Your Antithesis, it was first performed in 2011, in conjunction with the release of the group’s corresponding book:

Early on in the talk, the following visual pun was used to illustrate the group’s interest in the integration of ideological splits, such as the unlikely friendship between the regimes of atheist communist Russia and revolutionary Islamic Iran, as being one of the greatest challenges to the power of western free market capitalism in this century and the last. (“The enemy of your enemy is your friend.”) They also discussed the incorporation of the figure of the anti-modern in the form of Nasreddin, a medieval Sufi wiseman or fool who tells jokes while riding backwards on his donkey into the future. Nasreddin has been an inspiration for both the Molla Nasreddin and the collective practice of Slavs and Tatars, who look to history for ways to proceed into the future; use high and low aesthetic practices to communicate across a wide span of media and materials; and engage in lively, poetic, polemical debate within the academy, museums, international art fairs, and the public sphere. Further illustrating this point is the Slavs and Tatars newsprint publication 79.89.09., now available at LAPL. 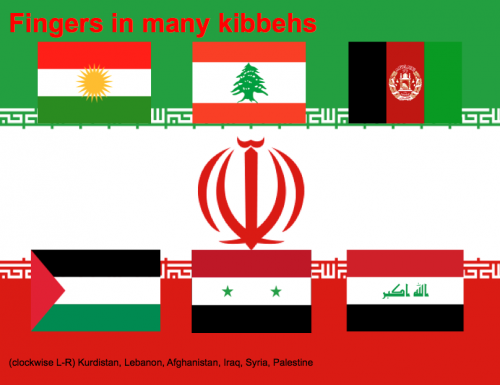 I picked up a copy of 79.89.09. before visiting their concurrent exhibition Friendship of Nations: Polish Shi’ite Showbiz at REDCAT. I also attended their lecture-performance of the same title, which repeated several talking points from the publication, as well as the Molla Nasreddin event. However, this event focused on the Iranian and Polish revolutions, while also nodding to the 2009 Green Movement and the massive failure of free-market capitalism. The REDCAT exhibition features banners stitched with slogans that comingle messages and images inspired by and appropriated from the Iranian revolution and the Polish Solidarity movement. “Help the Militia, Beat Yourself Up” is meant to invoke the sanctuary provided by mosques and the Catholic church within the two periods of unrest, or a Farsi translation of the Polish Solidarność slogan “Only solidarity and patience will secure our victory.” Behind the flags are sculptures, including Wheat Molla, which integrates the communist symbol of wheat ears into a Molla turban–a symbol for radical Shi’a resistance–placed behind a brick meant to symbolize the Polish labor movement. Encased in a vitrine, these objects, together, form an imaginary relic. Situated in front of this flag shrouded space are two Persian riverbeds, draped with rugs. They serve as public seating, a space to recover from information overload with friends and strangers, and read copies of 79.89.09 while sipping complimentary tea or vodka. Through all of this, there was a consistency of message. Certain phrases were repeated throughout the texts and talks–words translated into recurring visual tropes. This consistent reiteration was uncannily reminiscent of a 24-hour news cycle, provoking me to clench my jaws and open my eyes a little wider to the awareness of being corralled through fragmented repetition and interruption of language. It was a surprisingly good time. The Slavs and Tatars exhibitions at the Los Angeles Public Library and REDCAT are on view until March 23 and 24, respectively. Their work is also included in the group exhibition “The Assistants,” on view at David Kordansky Gallery in Los Angeles through February 23. To access the extensive collection of Slavs and Tatars videos, articles, texts, and other documentation, visit their website.