Looking at Los Angeles | Being Difficult 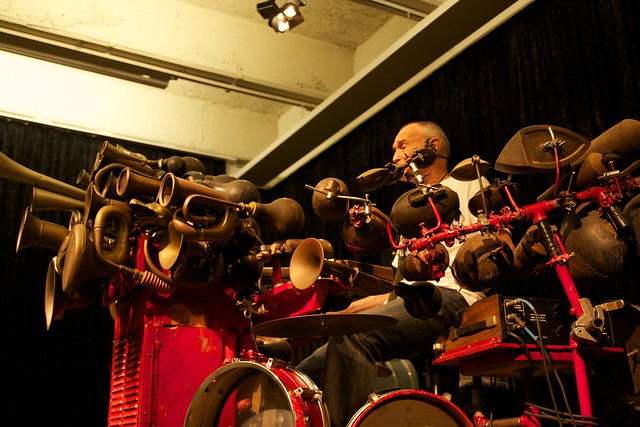 “You could hide beneath the stars, shoot at passing cars, like real cowboys do,” sang artist Llyn Foulkes at documenta 13 in Kassel, Germany, last June, dragging out the syllables of that last phrase for dramatic effect. He was performing there on his Machine—a red, black, and gold contraption that’s half drum set, half horn section. The Machine surrounds him when he performs; he hits the bass drum with his foot, hits the symbols and xylophone with his sticks, then occasionally squeezes or blows on the collection of brass and rubber noisemakers whose bells face the audience. At documenta, he sang about wanting to be a cowboy while living in Los Angeles, longing to be on the silver screen and wondering “what it all means.” Two nights ago at the Hammer Museum, he again performed with his Machine, this time singing about, among other things, how George W. Bush pulled a trigger to become a big star.

Foulkes’s Hammer performance happened in conjunction with the retrospective of his paintings at the museum right now, an expansive affair that covers fifty years of his art making, from his early pared down Jasper Johns-like assemblage to his later portraits of impaled presidents; tableaux of Superman as a company man; and images of Mickey Mouse as a little devil, all of which make Americana sinister. The world he approximates in his art is equal parts media-infused, pop-influenced, and dogmatically emotional—like it was made by someone’s cantankerous uncle who knows lines from movies by heart, can draw Mickey Mouse with his eyes closed, and deeply resents almost all powers that be. The retrospective highlights Foulkes cantankerous iconoclasm while pitching him as integral to L.A.’s art historical cannon, which is why it’s difficult to talk about. Does Foulkes stick out or belong?

Llyn Foulkes stands by his work “Flanders” (1960–62) at the opening of his solo exhibition at the Pasadena Art Museum, 1962. Courtesy and © Llyn Foulkes.

Foulkes should be pronounced “fawlks,” but it’s often mispronounced to sound like “folks.” This slip-up has been made especially in the three weeks since the Hammer show opened, and it feels like an accidental reveal, one that draws attention to the way that Foulkes diverges from the California minimalists and cool conceptualists he came of age with.

Foulkes certainly isn’t a folk artist in any conventional sense. He isn’t decorative or utilitarian, or in any way academically “naïve.” He went to school at Chouinard, Cal Arts’ predecessor, and as much of the press around this retrospective has pointed out, in 1961, the artist had his first solo show at West Hollywood’s Ferus Gallery. In L.A.’s art history, a brush with Ferus still equals a brush with consequence.That same year, Ferus’s directors, Walter Hopps and Irving Blum, offered Andy Warhol his first-ever solo show, and L.A. native Ken Price posed riding a wave for his now iconic exhibition poster. Yet Foulkes had left by 1964 and has managed ever since to keep scorning the establishment in a sincerely guttural sort of way—not the heady way in which, say, artist Bruce Connor reported himself dead to his dealers in 1967 or Lee Lozano “dropped out” of the art establishment early in the 1970s. Foulkes has never had nor seemed to want any conceptual smoothness.

About two-thirds of the way into the Hammer retrospective, you come upon Foulkes’s break-through painting Who’s on Third. It shows a man, rendered almost photographically, with a black-and-white rag over his face; straight, stringy torrents of perfectly red-orange blood stream down from under that rag. The man is shown in profile, so you can only see his photorealistic chin and neck, and his soon to be blood-stained white collared shirt. The sky (or maybe the wall) behind the man is a clear baby blue. Foulkes, who started this painting in 1971 and finished it in 1973, the same year that Roy Lichtenstein was doing his trompe l’oeil paintings and Philip Guston made his loosely irreverent painting of a big-nosed artist eating and smoking in bed, seems to dismiss both those approaches. Lichtenstein was all smart lines, and Guston all bulges and cartoonish riffs on expressionism. Foulkes has called their kind of consistency “easy.”

The last galleries of the retrospective showcase works from the ‘90s and the aughts, where figures and objects—some of them readymades affixed to the paintings and others made dimensional through layers of paint—pop off the surfaces. One of these dimensional paintings, Deliverance (2007), shows a silhouette of Foulkes, his head a mere outline and his body dimensional and fleshed out, shooting Mickey Mouse dead. A blank panel leans on an easel between the artist and cartoon character, and the image of a small child peeks in from the window while waves crash up against a desert landscape outside. This work appeared in The Hammer’s Nine Lives show two years ago, featuring L.A. artists “of-the-moment,” many of them decades younger than Foulkes. It included Kaari Upson’s fantasy version of the Playboy Mansion grotto; Lisa Anne Auerbach’s political sweater dresses made specifically for her body; and a portrait of Auerbach wielding a rifle while wearing a hand-knitted bikini.

Seeing Foulkes among these younger artists interested in issues of persona and in the overlays of fantasy and reality was telling. While Upson, with her grimy and unsettling grotto, or even gun-toting Auerbach were investigating ideas of difficulty and maintaining a certain distance from their subjects, Foulkes was performing difficulty. Being difficult is his main project, and it’s why people keep calling his retrospective “personal” or “raw.” Attitude that’s unmediated feels honest, and if Foulkes main legacy is as an antidote to the coolness and art-school aloofness that’s been associated with SoCal, it will be a good one.