On the Concrete Banks of the L.A. River: Kerry Tribe’s Exquisite Corpse 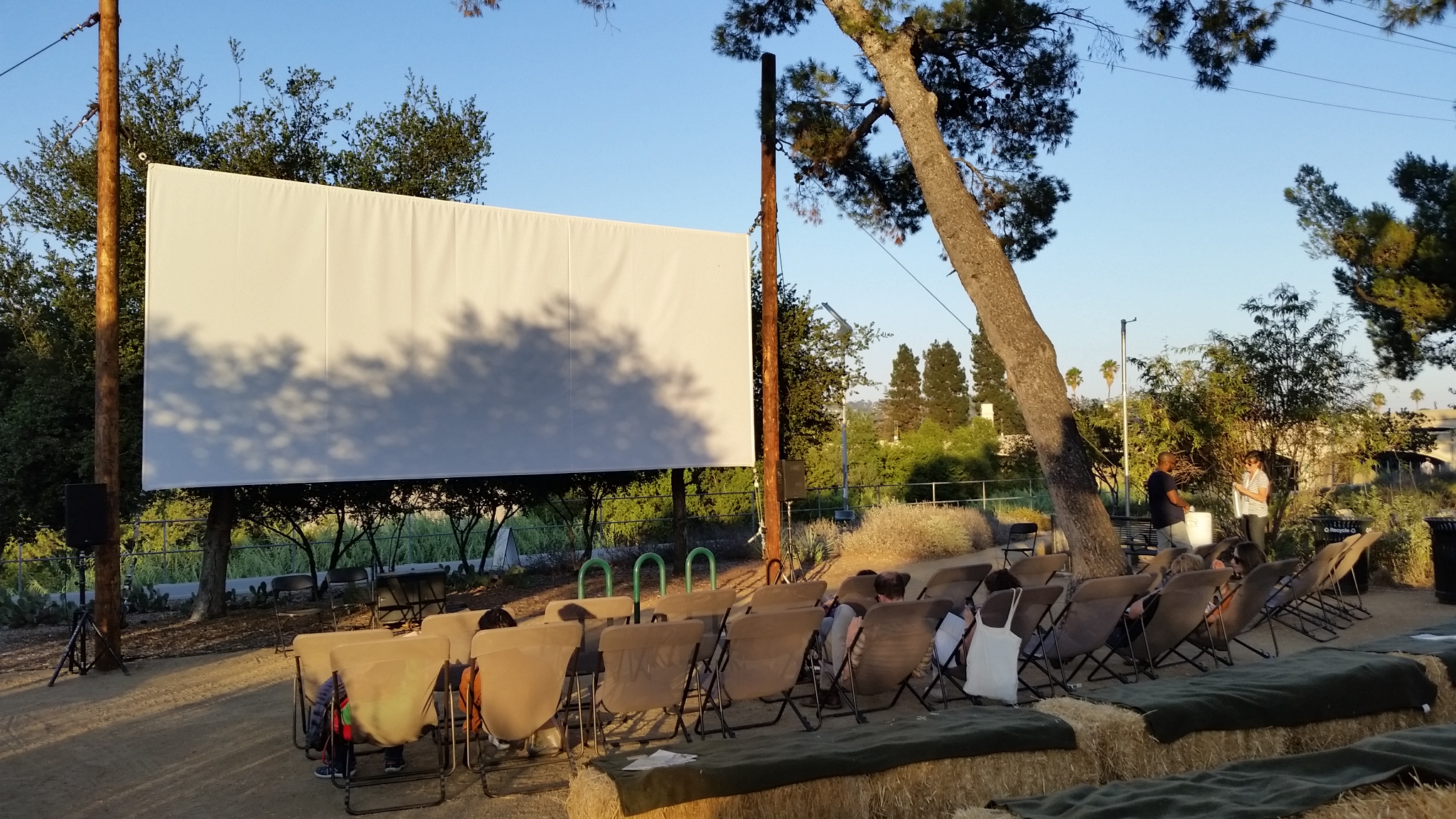 To get to Kerry Tribe’s Exquisite Corpse, a site-specific film installation commissioned as part of the first Current: LA public-art biennial, one had to make two fraught crossings on foot. The first, after parking at Current: LA’s temporary hub in an unused public park, was across broad, busy Riverside Drive in Los Feliz, without the help of a crosswalk. The second, after wending one’s way through a set of public tennis courts to find a leafy walkway enclosed by a chain-link cage, was over the teeming 5 Freeway. Although I was protected by the cage for the entire length of this crossing, walking across this old concrete bridge was one of the most precarious situations I have ever felt, with cars roaring at high speeds beneath my feet.

Once the passage was safely made, the scene revealed one of those kooky, hidden, unexpected wonders that are endemic to the city of Los Angeles: the entrance to Sunnynook River Park, a small, little-known recreation area carved into a parcel of previously neglected land adjacent to the Los Angeles River. Directly ahead, another crazy bridge—slightly narrower than the previous one, with only wooden railings for support—spanned the river, leading to a peaceful residential community on the other side. To the right, the park beckoned with its meandering, well-manicured paths through groves of trees, small areas containing benches and chairs, and helpful didactic panels pointing out the many native plants growing there. A healthy sprinkling of joggers and cyclists made use of the bike path winding between the park and the river. Above them, enormous power-transmission towers and their live wires loomed obtrusively, reminding one in no uncertain terms that one was still in the city. In a modest clearing inside this park, Kerry Tribe set up a cozy, makeshift outdoor theater where her film could be screened nightly for the duration of the biennial. Two telephone poles were installed to support a large screen, and hay bales and patio recliners made up the seating. Screenings began at 8:30 p.m. on the dot; on Fridays, they were preceded by a variety of talks and lectures.

Exquisite Corpse is best described as a conceptual exploration of the Los Angeles River. With a run time of exactly 51 minutes, the film looks at the 51-mile expanse of the river, from its origin in Canoga Park all the way to Long Beach, where it empties into the Pacific Ocean. Much of the film consists of gorgeous views of the river and its inhabitants, including underwater as well as aerial views filmed with a drone. There are also a number of short segments in which the viewer spends time with some of the river’s explorers, denizens, and workers, all of whom offer engaging insights into their particular relationship with the river. A botanist gives a tour of the native and non-native species of plants found there. A mother and her young son show the many animals and fruit trees they are raising in their river-facing front yard. A Swift Water Rescue worker explains the finer points of urban river rescues. A group of skateboarders glides by in silence, fully absorbed in their ride. 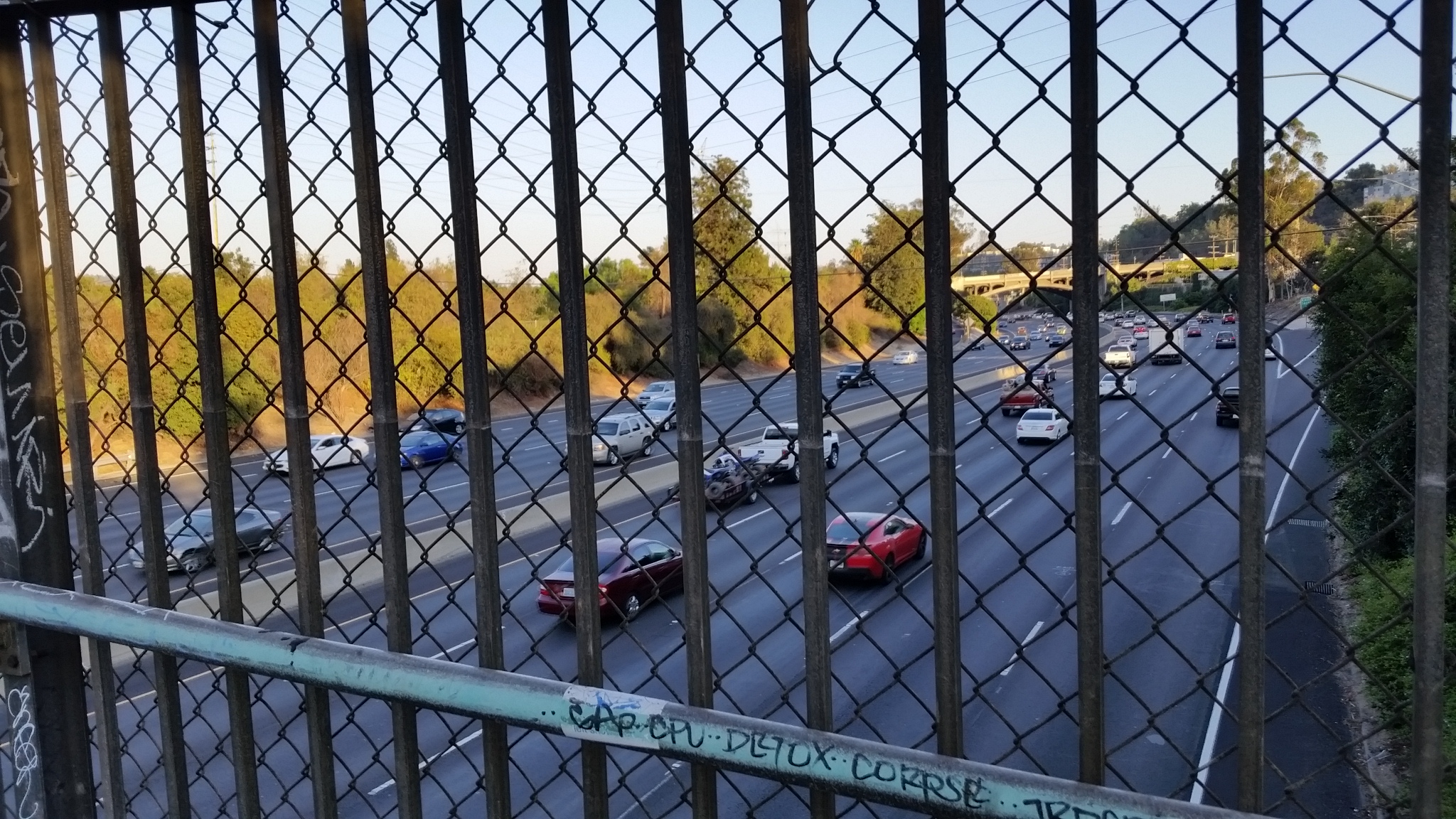 Watching the film is a meditative, evocative, and organically unfolding experience.

Watching the film is a meditative, evocative, and organically unfolding experience. The 51-minute/51-mile framing device holds it in place, but there is no overarching narrative or thesis. The film simply takes the viewer along as it meanders gently down the river, visiting with its people, looking at its flora and fauna, absorbing its ambiance. Often the film is surprising: A still life in the forest reveals what appears to be the flayed face of a dog. A woman leads Tribe into a derelict tunnel and shows her a rare collection of hobo graffiti from the 1910s—perfectly preserved because it was carved, not drawn or spray-painted, into the concrete walls. A young man with a guitar suddenly breaks into a stunning mariachi ballad. A homeless man proudly shows his family of cats, who keep him company; later, he tells in anguish of how a homeless woman died near his encampment because the paramedics wouldn’t take her to the hospital.

While the film, which allows the river to reveal itself, is interesting on its own, the experience of seeing it at the river was transcendent. The outdoor theater was set up so that the audience looked toward the river as the film played. In the film, there is even a quick shot of Sunnynook Park from the audience’s point of view: between the trees before the screen was erected. It is followed by a segment in which an Armenian clarinetist on the bike path plays his instrument, with the river’s bridge visible behind him. To experience the L.A. River in such an embodied fashion is no small thing. The river has a long history of erasure. Once wild and unpredictable, changing course from year to year and prone to violent flooding, it caused numerous deaths and the destruction of much property before the Army Corps of Engineers finally resorted in 1938 to paving the river’s bottom with concrete to control its flow and make the region safe for human development. For much of the twentieth century, the river was either forgotten or derided as nothing more than a flood-control channel, and to this day many people are unaware that it even exists. This is highly ironic, since the river’s nourishing water was a primary reason for the founding of the city of Los Angeles.

A major revitalization effort is now under way, as public consciousness continues to be raised about the river’s environmental and recreational potential. Sitting as it does in the midst of a tangled urban nexus, Sunnynook River Park forces the viewer to consider the river’s existence within the greater context of L.A.’s built environment. Kerry Tribe’s Exquisite Corpse—named after the Surrealist drawing exercise that knits discreet fragments into an uneasy whole—presents a running stream of variegated river perspectives, drawing the viewer into its many rhythms. All photos by the author for ART21 Magazine.