When Jacolby Satterwhite was eleven, he was diagnosed with cancer. While laid up in the hospital, he played a lot of videogames. His mother Patricia dreamed up inventions, recorded in glittery crayon, that might one day be sold on the Home Shopping Network. Satterwhite lost the use of one arm following a surgery that removed parts of his shoulder bone and the surrounding muscles. He underwent years of chemotherapy, successfully putting the cancer in remission. He went to art school and trained as a painter, using his left arm to support his right. He attended the Skowhegan residency, experimented with various computer processes, and eventually jettisoned painting—and its weighty, Eurocentric history—in favor of video and a multilayered, rococo style of 3D animation. It’s hard to be a queer Black painter without being interpreted as acting in opposition to several centuries of hegemonic whiteness. Working with new media allowed Satterwhite a certain freedom: the ability to extend the body into space without having to contend with a whole lot of conceptual baggage. However, he didn’t leave painting behind so much as transpose its compositional logic, saying in a June 2019 phone conversation: “Sometimes you can take time off to deal with other materials, to interrogate the formal relationships that are between some of the things paint interrogates. I’m still trying to resolve the same things since I was fourteen!”

“If you add so much warm energy to such a cold artifact, it creates a nice tension.” –Jacolby Satterwhite

A hallmark of Satterwhite’s practice is its incorporation of the art his mother made, but this personal touch extends to the haptic. “I like my relationship to technology to be super tactile, with every thumbprint embedded in every mark I make in a digital program,” he explains. “A kind of subconscious poetry happens. If you add so much warm energy to such a cold artifact, it creates a nice tension.” It’s terribly boring to talk about technology interfacing with the body, when we’re so interpellated by it. Our daily performances of our selves are so inextricable from our social media. 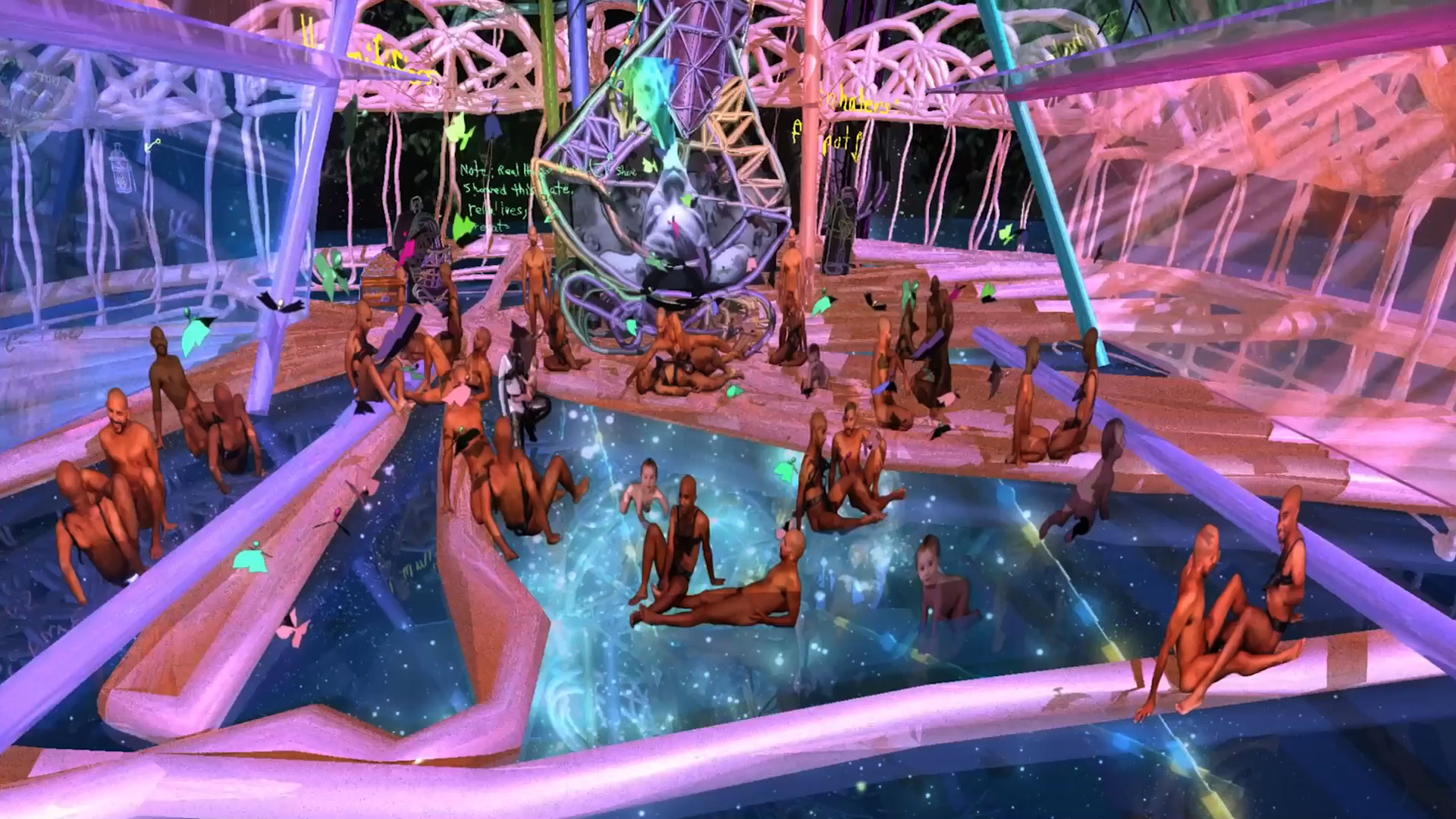 What Satterwhite also finds boring: talking about sex, gyrating club kids, and (worst of all) cyberpunk. He hates being associated with the last term in that list, emphasizing that he’s been wired to his computer and FTP culture since he was a kid, and his visual sensibility is entirely his own. He’s especially scathing about Tumblr subcultures like seapunk—the kinds accusing popstars like Rihanna or Azelia Banks of appropriation—emphasizing, “It’s the laziest thing I’ve ever heard of! Just because you found out how to use the fade button in Photoshop, you’re going to copyright it as a movement?”

“What Satterwhite also finds boring: talking about sex, gyrating club kids, and (worst of all) cyberpunk.”

Japanese game culture, like that arising from Final Fantasy, did leave its mark on Satterwhite’s predilection for pinks, purples, and greens. He notes this tertiary palette extended to the pop music and contemporary-art culture of the time, too, citing works by Chris Cunningham, Bjork, Alexander McQueen, and Madonna (the Ray of Light album cover) as examples of the cerulean blues and violets that were prominent when he came to fruition as a colorist. While 1990s video-game palettes were delimited by hardware, and Satterwhite’s preferred 3D software, Maya, allows unlimited palettes, he notes that his color scheme “allows me to quickly play with more complicated relationships in the landscape.” Satterwhite is further inspired by Bjork’s strategy of limiting her aural palette of synth or vocal samples. One of Satterwhite’s new projects uses 155 of his mother’s scratchy a cappella recordings, made while she was institutionalized after being diagnosed with schizophrenia, as a starting point for a lush trip-hop and acid-house inflected electronic concept album. He describes the process of interpreting her cassette tapes and weaving them into a landscape of beats and sounds as a kind of synesthesia. His visions in turn become accompanying video works, like his Birds of Paradise (2017-19) series, which he describes as exploring Nigerian shrines and rituals about material culture, among other aspects close to the mythology of his work. These works will soon be on view at Pioneer Works, in Brooklyn, along with a vinyl-record release, a Tower Records–style installation, and, later this year, a full-blown concert at Performa. The album has been a long time coming. Satterwhite has been trying to make it since 2008, but it was only upon meeting his collaborator, Nick Weiss, that he was able to realize his vision. Two years in the studio followed, including cameos from musicians and friends. The record will be released on streaming services and “critical pipelines of that genre,” including a forthcoming Pitchfork review of one of its singles. Satterwhite takes pains to emphasize that this will be a legitimate record, not a cheesy artist one. He says, somewhat heatedly, “It’s a real record; it’s better than real music. It needs to be critically interrogated in that genre because it’s doing something that other music doesn’t do, which is a kind of revivalist form using a limited palette activated by a VR project. [It] interrogates where music is going and the objecthood of music.” It deserves to be in that conversation, he says, and “Why not? That’s what [my mother] wanted.” “The video is an exercise in ambiguity; hierarchies are hard to pick out.”

Over the course of our conversation, Satterwhite seems like someone holding a set of weighted battle ropes, the kind one might see rippling at the local gym. His near future includes a solo exhibition at the Fabric Workshop and Museum in Philadelphia and his first retrospective (with an accompanying monograph) at Carnegie Mellon University next year. If one rope is the Birds of Paradise (2017-19) series, the other is his piece titled Blessed Avenue (2018). He describes it as “anthropomorphized avatars performing various banal, mechanical, pipeline actions” on one channel and a composite abstraction of various disaster zones and Pegasus-like winged horses on the other. The video is an exercise in ambiguity; hierarchies are hard to pick out. He says, “You can’t tell if it’s a party or some kind of communist system.”

In contrast to the opacity of the video, Satterwhite is increasingly certain about where he’s heading, and he’s looking forward to showing multiple timelines of his practice: “Everyone will understand the threads that were ambiguous or confusing. I understand myself now more than I ever have in my career or practice, and I think it’s time to bring back everything and show my intent. Now that I’m finding myself, settling down into my language, I want to make some things clear.”

Contributor
Rahel Aima is a freelance writer and editor from Dubai who is currently based in Brooklyn. She mostly writes about art, technology, and politics. She is a special projects editor at The New Inquiry, a correspondent at Art Review Asia and a contributing editor at Momus. Her writing has appeared in or at Art Asia Pacific, Artforum, Artnet, ArtReview, Canvas, Creators Project, Document Journal, e-flux architecture, Elephant, Foam, Frieze, Mousse, among others.
Go to articles